This Pydon't will teach you how the basics of list comprehensions in Python.

(If you are new here and have no idea what a Pydon't is, you may want to read the Pydon't Manifesto.)

List comprehensions are, hands down, one of my favourite Python features.

It's not THE favourite feature, but that's because Python has a lot of things I really like! List comprehensions being one of those.

This article (the first in a short series) will cover the basics of list comprehensions.

In this Pydon't, you will:

I also summarised the contents of this article in a cheatsheet that you can get for free from here.

You can now get your free copy of the ebook “Pydon'ts – Write beautiful Python code” on Gumroad to help support the series of “Pydon't” articles 💪.

List comprehensions are great because they provide a very convenient syntax to generate simple lists. This often is a good alternative to using a full for loop with a series of calls to the .append method of the list you want to build.

The key idea behind list comprehensions is that many lists can be built out of other, simpler iterables (lists, tuples, strings, ...).

For example, if you want to build a list with some square numbers, you will probably start off by using a range to create a series of consecutive integers.

A list comprehension has four parts, one of which is optional. Here is a diagram representing those four parts:

The second part is the expression that you apply to each element of the initial seed data you are using. This is often a function call or another expression, like an arithmetic expression, that transforms each element into a new one. In the diagram above, this is represented by func(elem).

The third part is the for component that establishes what the initial data is, and where we are going to draw our elements from. This is akin to the for ... in ... of a standard for loop. In fact, it looks exactly the same as the initial statement of a for loop, and it is represented by for elem in iterable in the diagram above.

The fourth part, which is optional, is an if statement. This if statement is used to filter elements from the initial seed data, in case we want to ignore some of it/only use part of the data. This is represented by the cond(elem) above.

This is also equivalent to,

which is better because it uses less initial data.

The result only contains the word “is” because that's the only word that was entirely lower case in the original sentence “This is Sparta!”.

The final result only contains 8 numbers (while the original sentence contains 10 words) because the words “be,” and “question.” had punctuation next to them.

Equivalence with for loops

A list comprehension is equivalent to a for loop that consecutively calls the .append method of an (initially) empty list:

This is, in fact, one of the most common patterns that list comprehensions are useful for.

If you find a piece of code that initialises an empty list, and then uses a for loop to populate it with data, that's probably a good use case for a list comprehension.

Of course this isn't always doable in a sensible way, list comprehensions are not meant to replace all for loops. But if you have a short loop exhibiting the structure above, then that could probably be replaced by a list comprehension.

I challenge you to do just that. Go through some code of yours and look for that pattern. Then, try replacing it with a list comprehension.

Here are the list comprehensions from before, with the equivalent for loops:

A prime usage example of this is to flatten a list of lists:

The second loop doesn't need to depend explicitly on the first one; it can iterate over another iterable, to create another variable. When you do so, all the temporary variables that are going through iterables become available to be used on the left.

This pattern arises naturally when you want to combine information from two or more data sources:

Notice that, in here, to “combine” the information means to create all different pairings with the data from one and the other iterable. If you want to create pairings by traversing two iterables in parallel, then you should read up on zip.

Much like you can nest for loops to iterate over more iterables, you can nest if statements to create stricter filters.

However, with the if statements, this is the same as combining the successive conditions with ands. That's because Boolean short-circuiting makes sure that later conditions only get evaluated if the earlier ones evaluated to True.

This means there is a series of equivalences when we think about list comprehensions with nested if statements:

The two sections above showed you that you can nest multiple for loops, and also multiple if statements.

Now, the only thing left for you to know is that these can be mixed and nested arbitrarily. Of course, you should not nest things too much, because a long list comprehension is harder to read than the equivalent nested formulation.

The further you are to the right in a list comprehension, the deeper you are in the equivalent nested formulation:

List comprehensions are often deemed a more Pythonic replacement for calls to the built-in functions map and filter.

map takes a function and applies it to all elements of an iterable, and that's straightforward to do with a list comprehension:

Similarly, the built-in filter can often be replaced with a more Pythonic list comprehension.

Please, bear in mind that the list comprehension versions of map and filter are not equivalent to using map and filter. The underlying data is, but the containers themselves are slightly different.

Not only that, but I'm also not saying that map and filter are useless. A later Pydon't will be devoted to understanding when to use map and filter, so make sure to subscribe to the newsletter to not miss that Pydon't.

A neat little example of where a list comprehension is the way to go, is when generating some random data.

For example, to generate three integers to represent an RGB colour,

or when generating a random string:

While browsing Twitter, I found someone writing a little Python script to interact with Amazon Web Services to get IP prefixes for different services. (Whatever that means.)

At some point, they had a simple for loop that was iterating through a bunch of prefixes and storing them in a list, provided that that prefix had to do with a specific Amazon service.

This person is a self-proclaimed Python beginner, and so I thought this was a good opportunity to show how list comprehensions can be useful.

The relevant excerpt of the original code is as follows:

Looking at the code above, we can see that the list service_prefixes is being created and then appended to in the for loop; also, that's the only purpose of that for loop.

Therefore, we can replace the loop with a list comprehension. The variable count is superfluous because it keeps track of the length of the resulting list, something we can find out easily with the function len.

Here is a possible alternative using a list comprehension:

Here's the main takeaway of this Pydon't, for you, on a silver platter:

“List comprehensions are a powerful Python feature that is useful for building lists.”

This Pydon't was also summarised in a free cheatsheet: 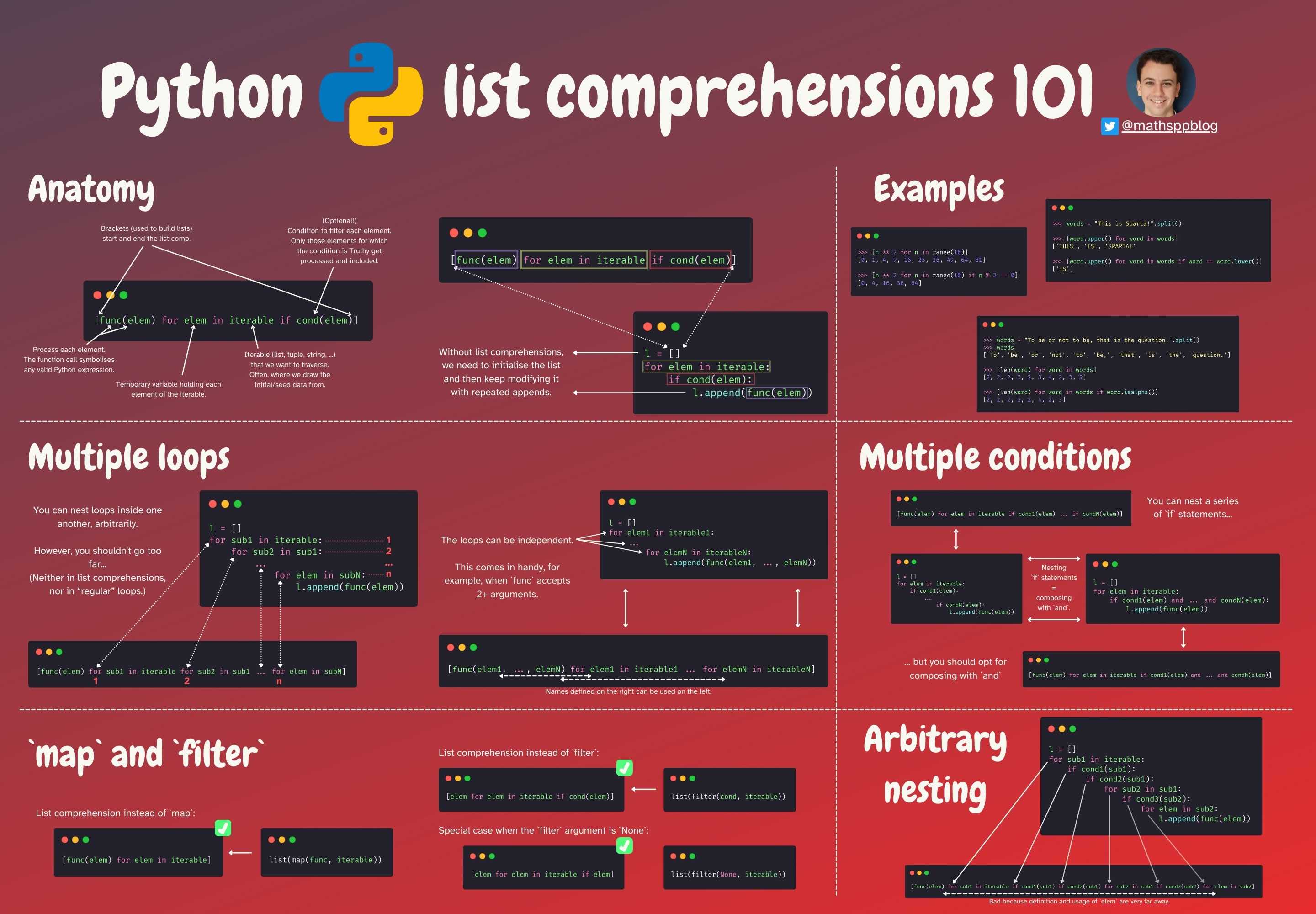 This Pydon't showed you that:

If you liked this Pydon't be sure to leave a reaction below and share this with your friends and fellow Pythonistas. Also, subscribe to the newsletter so you don't miss a single Pydon't!