Filling your Pokédex - a probabilistic outlook

Join me in this blog post for Pokéfans and mathematicians alike. Together we'll find out how long it would take to fill your complete Pokédex by only performing random trades. 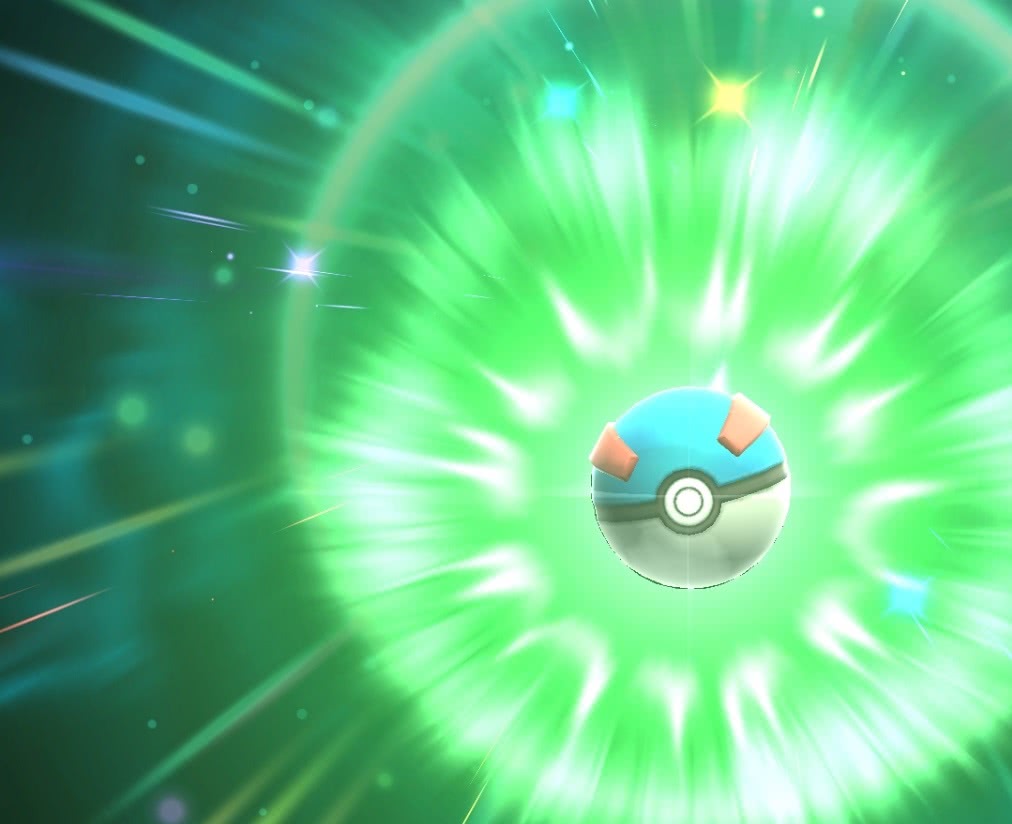 The objective of this blog post is to take a look at how one computes the average time it takes for a random event to happen. We will use a particular mechanic of the Pokémon games as the motivating example, after briefly introducing it in case you don't know it.

We will perform the necessary calculations and I will explain them step-by-step to you, so you learn how to do them for yourself. This is done by the end of the post, so as not to break the main flow of the post.

By the time we are done,

Pokémon games and the Pokédex

This brief section aims at introducing you to the world of Pokémon. I will explain the very basics of the game, enough so that you understand the "Formulating the problem" section that follows. You can skip to that section if you already know what the Pokémon games are all about.

In the Pokémon games there exist some creatures (called Pokémon, short for "pocket monsters") that you can capture and collect.

Here's a low-quality image with three of them:

At the time of writing, there's 898 different Pokémon. In the games, your Pokédex is like a catalogue of all the Pokémon you've seen and you've owned, and one of the objectives of the games - at least for players that take the game seriously - is to fill the Pokédex (i.e. meet all Pokémon).

Pokémon can be met in the wild but you can also trade them with your friends or with random people on the Internet.

In this blog post we wish to see how long it would take you to fill up your Pokédex if all you could do was make random trades. That is, if your only way of gaining access to new Pokémon was through trading, but in such a way that you had no control whatsoever on the Pokémon you would be receiving.

We wish to see the average number of trades it would take before we got to see all 898 Pokémon that exist at the time of writing.

We will assume we start with one single Pokémon and we will also assume that, in a random trade, all 898 Pokémon are equally likely to make their way to you.

(This assumption will make the calculations slightly easier but doesn't necessarily hold, for example it is clear in the "Wonder Trade" system of Pokémon Home that some Pokémon appear much more frequently than others.)

Abstracting it from the context

If we strip the problem of its "superfluous" details (from the mathematical point of view), then what we want to know is the estimated value of the number of trials it would take for us to observe the remaining 897 outcomes of a random event, assuming all events are equally likely.

In here, the outcomes refer to "receiving a specific Pokémon" and we only consider 897 of those because there's one Pokémon we don't need to receive: the one we start with.

In tackling probability problems like this, it is often useful to try and break it down into several parts, so that we have smaller subproblems that are easier to deal with. Then, we perform the computations we need for each of the subproblems and in the end we combine everything in the appropriate way.

For this particular problem, thinking about how many trades we need in order to find all 898 Pokémon may be a bit overwhelming, but we can instead think about these:

If I have seen \(10\) Pokémon so far, how long (on average) will it take for me to receive a new Pokémon through a random trade?

If I have seen \(253\) Pokémon so far, how long (on average) will it take for me to receive a new Pokémon through a random trade?

If I have seen \(890\) Pokémon so far, how long (on average) will it take for me to receive a new Pokémon through a random trade?

If I have seen \(n\) Pokémon so far, how long (on average) will it take for me to receive a new Pokémon through a random trade?

In fact, once we think about the problem above and recognise it as the most important question we need to answer, we can write down the solution to our original problem!

The solution to the original problem reads

Now we just need to compute the terms to the right of the equality above, and trust me: these are much simpler to compute when compared to the original problem.

Let \(T(n)\) represent "the time it takes to meet a new Pokémon, assuming we've seen \(n\) different Pokémon so far". In that case, because we start with a single Pokémon, the solution is

So, the probability of meeting a new Pokémon after seeing \(n\) different Pokémon is \(\frac{898 - n}{898}\). Of course, unless \(n = 0\), this is less than \(1\) and so it may happen that we get a repeated Pokémon and we need to make more random trades before getting a new Pokémon. This means that computing \(T(n)\) is also accomplished by breaking this problem into smaller problems and tackling those.

Breaking it down... again?

In fact, notice that meeting a new Pokémon after having seen \(n\) different Pokémon can happen in a variety of ways:

If we manage to compute each of the probabilities above, then we can use the definition of expected value to compute \(T(n)\).

Remember that the expected value of something is equal to a sum (or an infinite sum, a summation): each single outcome times the probability that specific outcome has of happening.

The time it takes to meet a new Pokémon

If we take the train of thought that I laid out above, and if we write a summation with all possible numbers of trades we might need to meet a new Pokémon and if, on top of that, we multiply each said number by the probability that that is the amount of trades we need, then we get

and that might look ugly, but that is the definition of expected value of the event "meeting a new Pokémon after having seen \(n\) different Pokémon". Thankfully, the result looks much nicer. Please, go ahead and try to compute the summation for yourself. It is a really good exercise. The calculation is done step-by-step by the end of the post.

The result of the summation is

The time it takes to meet all Pokémon

Previously we have seen that our problem was reduced to computing

And there you have it!

On average, you need to make roughly \(6624\) random trades until you can meet all \(898\) different Pokémon there exist!

Now I'll show you the auxiliary calculations I performed to achieve at the final result. I will also show you a couple of tricks I use myself when doing these calculations, given that I am terrible at memorising formulas.

Go ahead and skip right to the bottom of the post if all you want is show your appreciation for this post, by reacting with an emoji, or by commenting with your thoughts!

If you want to stick around and learn a couple of tricks, here we go.

We want to compute the following summation:

In case you never did this, I don't want you to be caught by surprise. Here's the main overview of the steps we will be taking. Don't worry if you don't understand how everything fits together, I just want you to have the bigger picture:

Derivation of the formula

I will try to be fairly careful with all the intermediate steps but if you just want the main idea, you can fast-forward.

In order to do so, the first thing we do is look at

Most will know the formula for the result, but I have terrible memory and so I don't. What I do know is how to find it out:

If we put both of these together, we get

Another way to get there, perhaps easier to understand, is by writing the following:

Now notice that by the quotient rule, and some rearranging,

Thankfully, we have that

But in that case, what we managed to show was

Looking back at our original summation, we had

And that settles it.

For this section I was relatively careful with handling the infinite summations and the derivatives, but sometimes you just don't have the time and you know things will work out. When that is the case, you may want to skip a few steps (at your own risk!):

If we are to fast-forward past some intermediate steps that usually won't be problematic, we could've gone like this:

Playing with what you leave out of the \(g_k'(p)\) in the first step allows you to use this technique for different combinations of exponents and constant terms. You may also have to employ several layers of this trick, for example to compute

For this one you'd split it into

There are seven mathematics problems called Millenium Prize Problems, each with a $1,000,000 bounty.